On a recent trip to London I fell in love with a high couture knit jacket. When I came across this beautiful quilted cable knit fabric I decided to make my own variation using the jacket I had seen as inspiration. 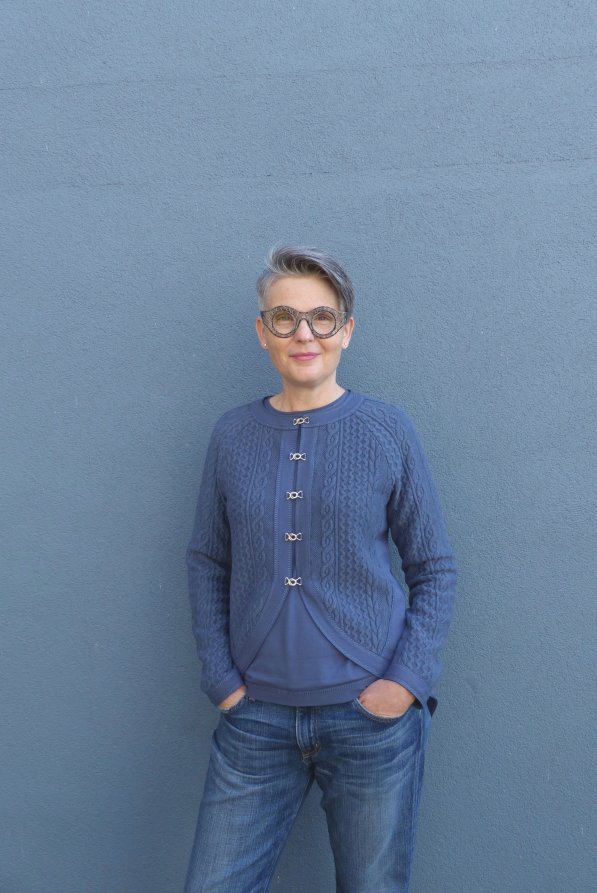 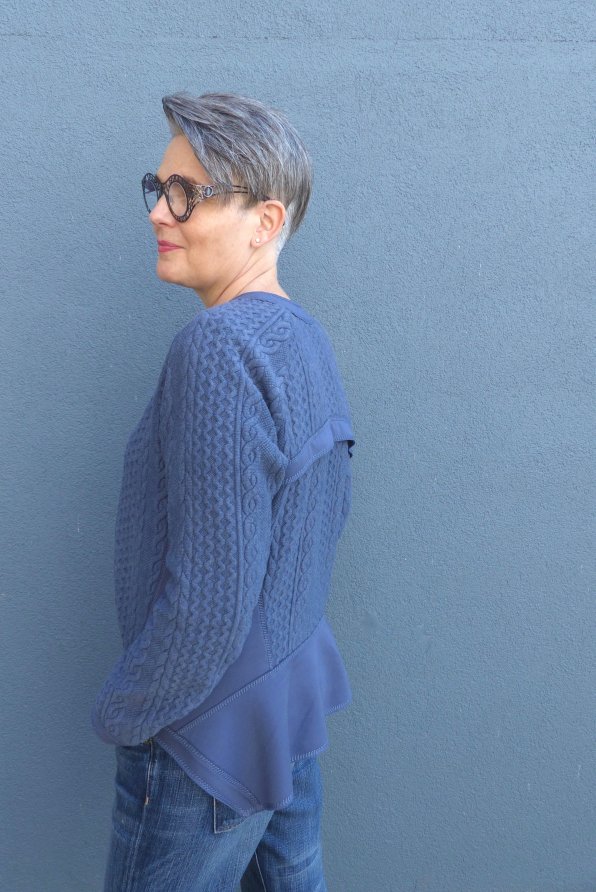 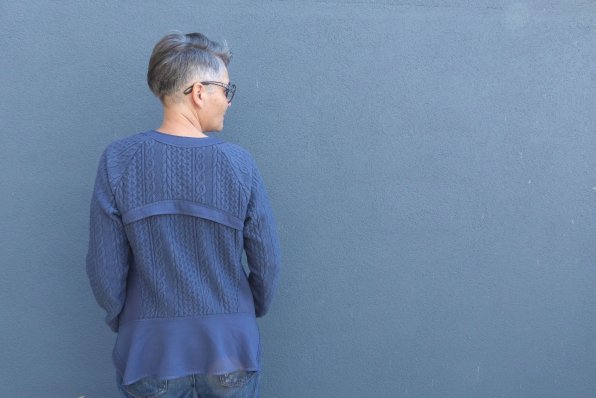 It is perfect for crisp spring or fall days but also works well in air-conditioned rooms during the summer. A perfect weight to layer easily over other garments, it looks great with jeans, trousers, skirts or as a topper over a dress. I have teamed it up with a matching T-shirt and have been wearing it casually with jeans. I can see that this jacket is going to see a lot of wear!

(For more photos, scroll down to the bottom of the article!)

I used 1 1/2 yards of the quilted cable matelasse’ knit in the denim color. (It also comes in seagrass and black. Creamy white and light gray heather will be available soon as well.)  I cut the pattern crosswise to allow the cables on the fabric to run lengthwise. The fabric has enough stretch and seaming so that it is not a problem to use the fabric on the cross grain.

For the contrasting sections I used 11 oz. rayon jersey in slate blue (now sold out, no longer available—see special note at the bottom of this section), which matched so well that I made a coordinating T-shirt to wear underneath the jacket. In total I used 2.5 yards of the 11 oz. jersey, to complete all the contrast sections plus the T-shirt. If you use a thicker knit for contrast (a ponte for instance), you can skip some of the doubling and interfacing steps described below. You can also make the entire jacket from the cable knit.

SPECIAL NOTE: Please contact us for more information regarding coordinating fabrics for these cable knits. Fabrics are sometimes discontinued but there’s always another option! 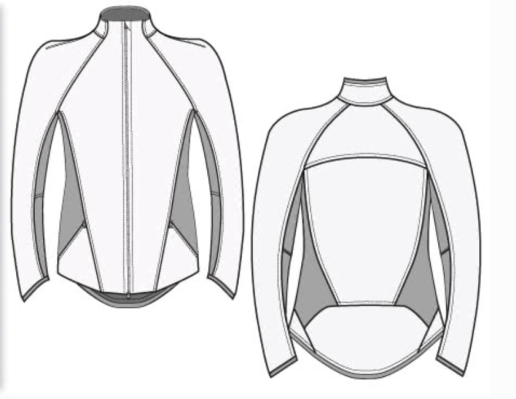 I chose a pattern that was similar to my inspiration garment. The Steffi Jacket from StyleArc was the perfect choice as it had similar seaming and required only a few changes:

1. I redrew the CF into a curved hem and omitted the zipper.

2. I wanted to add a band around the neckline instead of the collar. To do this I cut the jacket using the original pattern. Once the jacket was assembled I draped the
garment on my dress form and marked a new finished neckline. From the finished
neckline, I drafted a 1 1/4” wide band and added seam allowances.

3. I also added a band 1 1/4″ wide to CF. There is no overlap; the bands are intended to just meet at CF. I extended the bands to end at the bottom of the back flounce.

5. I replaced the lower back panel with a long rectangle that was slashed and spread along the bottom edge to create a more flared back panel. To create the lower back panel I measured the length of the seam and cut a rectangle pattern piece 6” wide. I slashed the
rectangle at CB and then again 5” either side of CB. I spread these three slashes 3” each, which turned my rectangle into more of a U shape. When the U shape is sewn to the lower back edge it creates a flounce. 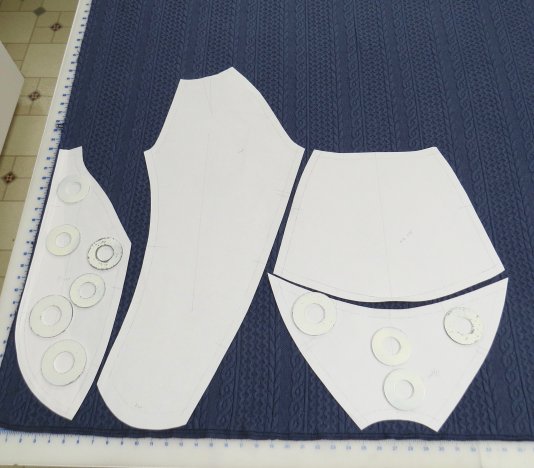 The pattern was cut on the crosswise grain so the cables would run vertically. Most pieces didn’t require matching since they were separated by a contrast panel. The only pieces that were matched were the upper back, mid back and upper sleeve. I also made sure that both front panels were mirror images of each other. To do so I had to cut them in opposite directions:

Since there was so much fusing for this project, I fused everything using an Elna Press, which gives a very strong bond and covers more area at once, making the job quicker.
Alternatively, an iron can be used.

To create a good bond follow these steps:
1.  Warm the fabric first with the iron.
2.  Position the fusing. Use a lift and press motion rather than a gliding motion to fuse the
interfacing. Holding the iron in one place for approximately 15-18 seconds should create a good bond.
3.  Turn the fabric over to the right side and press again. This will draw the glue into the fabric creating a permanent bond.

I used a coverstitch machine to sew all the seams on this garment, but if you don’t have one, this project would be a great opportunity to experiment with decorative stitches in your sewing machine library.
To achieve this seam, I used all 3 needles on the coverstitch machine, and a fancy thread in the looper. The heavier thread in the looper created a stitch that matched the cables of the fabric very well.

I used a maximum stitch length of 4mm and pulled on the fabric slightly as I fed it into the coverstitch machine. The longer stitch length and technique of pulling on the fabric slightly built more give into the stitch, which gave it greater stretch. This was particularly critical in areas that required a lot of stretch such as the neckline and hems of the Tshirt as well as the sleeves of the jacket.

Experiment with decorative stitches in your stitch library using a heavier thread. Depending on the thickness of the thread used, you may need a top stitching needle. Try lengthening stitches to accommodate the thicker thread. Choose stitches which are not too dense.

Thread trace stitching lines on all pieces cut from cable knit fabric, as well as inside layer of the contrast pieces.

Lay inner contrast piece over wrong side of cable knit piece, lining up seam lines. Baste 1/8” away (in yellow).

Cut seam allowance off vertical seam of outer contrast layer and lay on top of right side of cable knit, lining up raw edge with original seam line of basting. Baste in place close to raw edge, being very accurate as this will become your sewing guideline. Remove all other basting.

On wrong side, coverstitch seam following the basting thread by positioning it between the first and second needle. This worked well on my coverstitch machine. Practice a sample first on your machine to determine spacing. Remove basting and press. 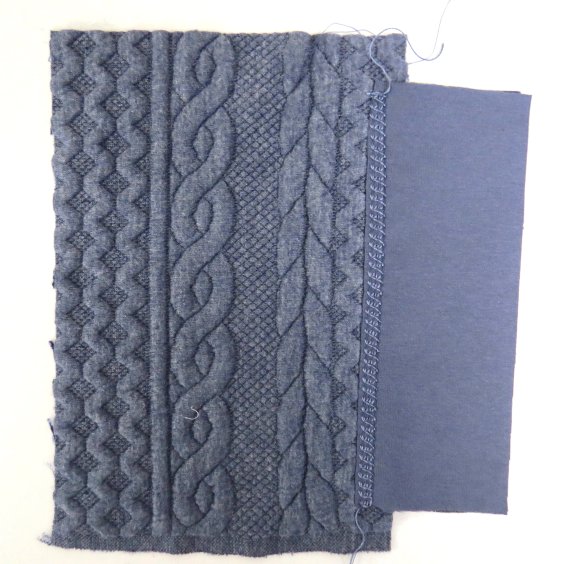 Wrong side up when coverstitching: 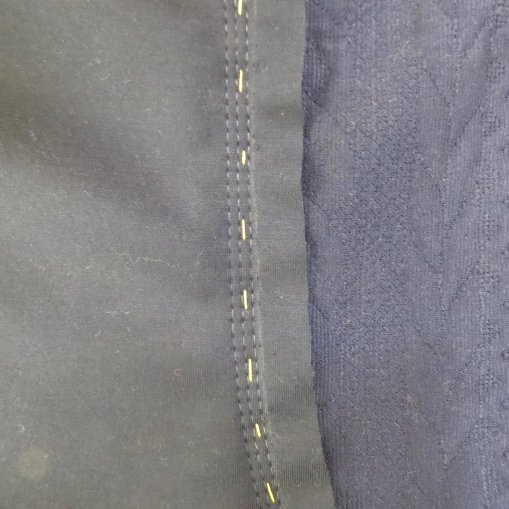 On wrong side trim away seam allowance of contrast using applique scissors.

Open up layers of contrast panels and carefully trim away cable knit as close to stitching as possible to reduce bulk.

Most seams are done using this method, exclusive of shoulder seams on neck band and upper and lower under sleeve panel seams, which are lapped separately.

Baste both layers of upper back band wrong sides together, along lower seam line. From
wrong side, coverstitch. Trim close to stitching. 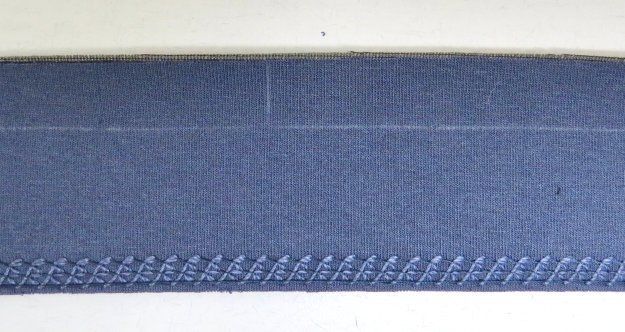 Lay underside of upper back band behind upper back panel. Baste. Lay mid back panel along same seam and baste. Serge or zig zag seam down to 1/4” wide. 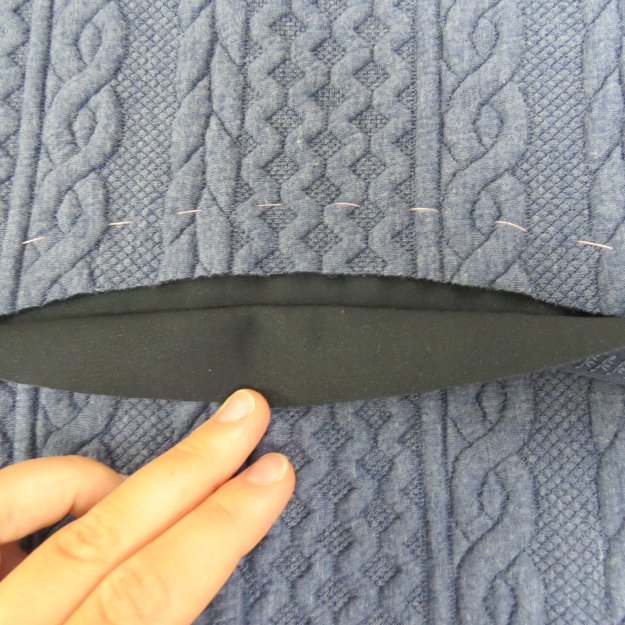 Trim off seam allowance on upper edge of upper back band.

Trim cable knit seam allowance. Baste band down along seam line. Coverstitch from wrong side, through all layers.

Attach front bands using seaming technique described above. Chalk exactly 1 1/8” away from raw edge. Baste along chalk line. Turn to wrong side and coverstitch. From right side trim close to stitching. Be extra careful to cut smoothly since this will remain a raw edge and will be the CF of the jacket. 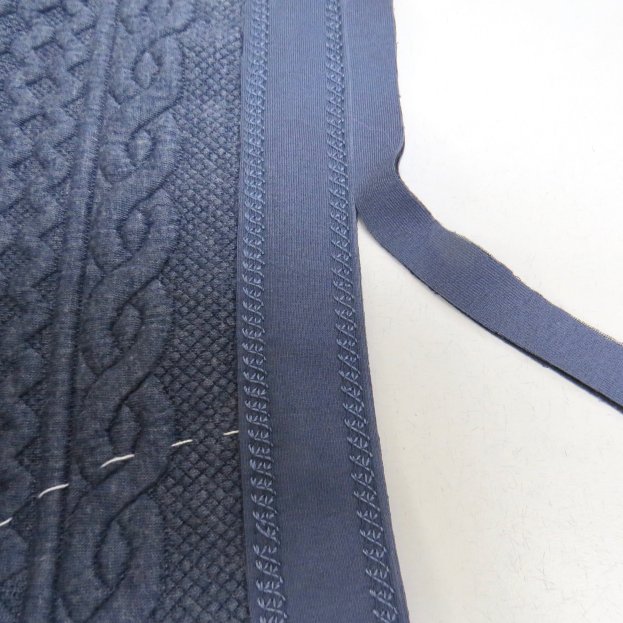 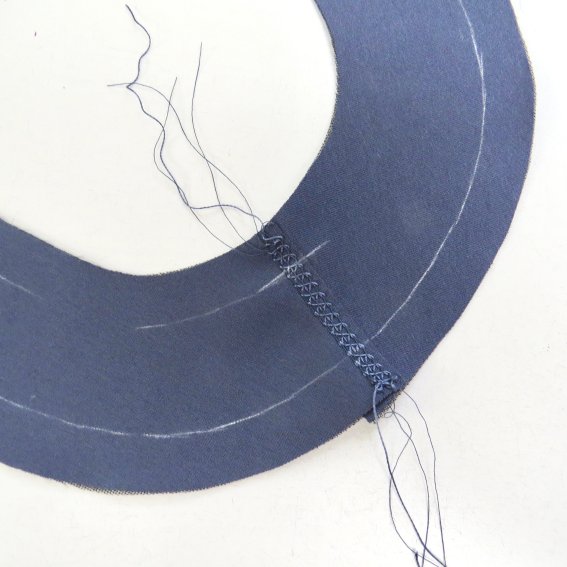 The sleeve can be tricky as it has to be turned through a skinny panel in order to achieve this type of seaming. The sleeve is wide enough to accomplish this technique. The stretchy fabric also helps.
One seam on the sleeve is done exactly as all the other seams, but the second seam has to
turn through the contrast panel in order to access the seam and trim the cable knit seam
allowance down. This is done after the second seam of the sleeve has been sewn. The seam can be accessed through the underarm area.

Try on the garment and mark bust on the front band. One closure should sit at the bust to prevent the garment from gaping. Mark the center of the neckband.

Use a metal buttonhole spacing guide to mark 5 closure placements. The spacing guide should align with the neck and bust markings with one more marking between these two and two below the bust.

The closures should be positioned so that the edges of the front band meet but do not overlap when closed.

Chalk the position of each closure. 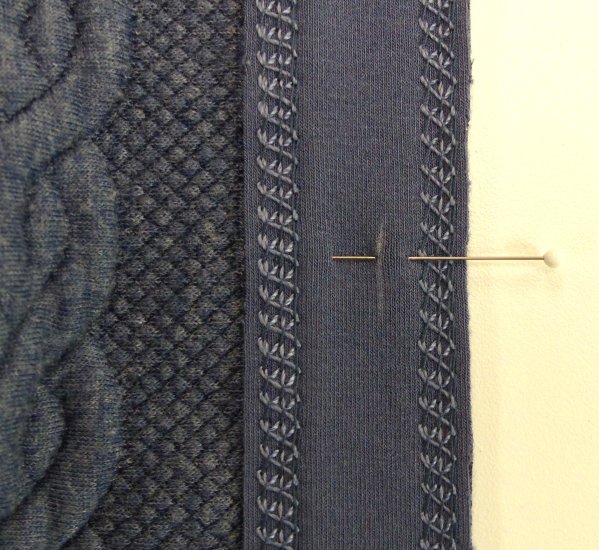 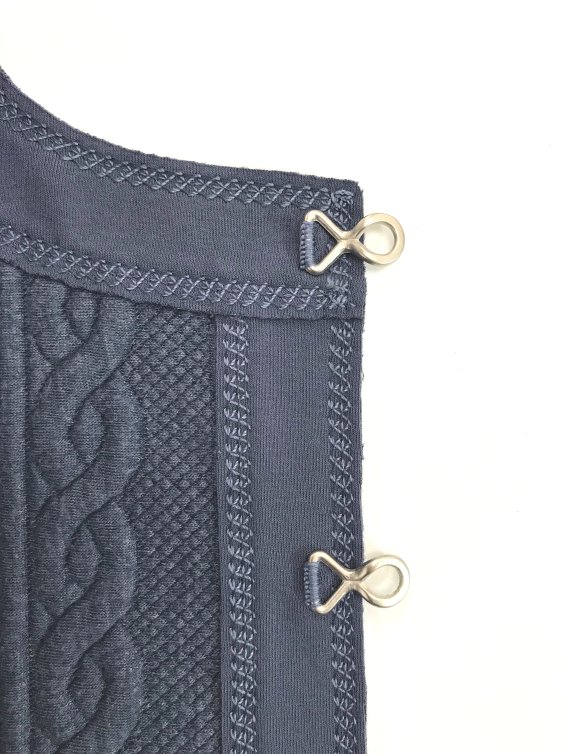 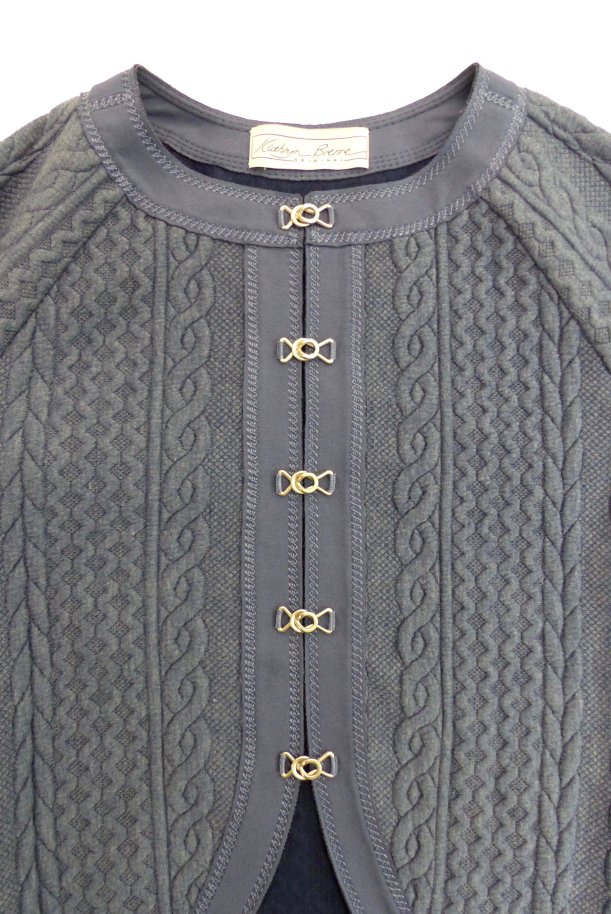 I used my favorite basic T-shirt pattern, Ce Podolak’s Material Things Fearless T-shirt #109 to create a coordinate to wear with the jacket.

I sewed the shoulder seams first and then tried the T-shirt on with the jacket to see how the two necklines would sit. I wanted the T-shirt to be exposed and sit slightly higher than the jacket neckline.

Try the garment on and pin the side seams and sleeves to fit. I found the rayon jersey was quite stretchy. Pinning the side seams after the neck and sleeves were finished allowed me to pin the fabric in slightly from the regular stitching line for a closer fit. 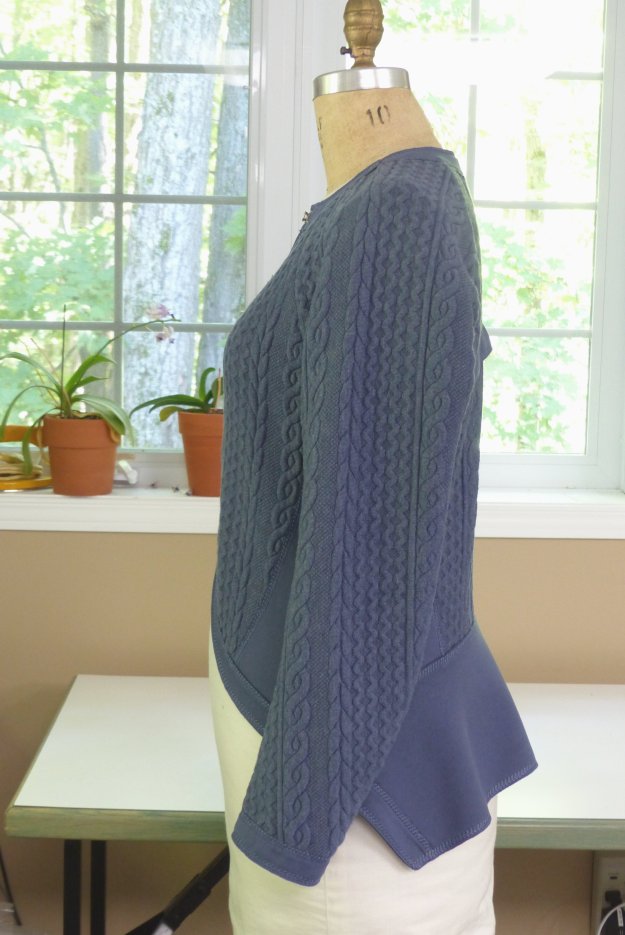 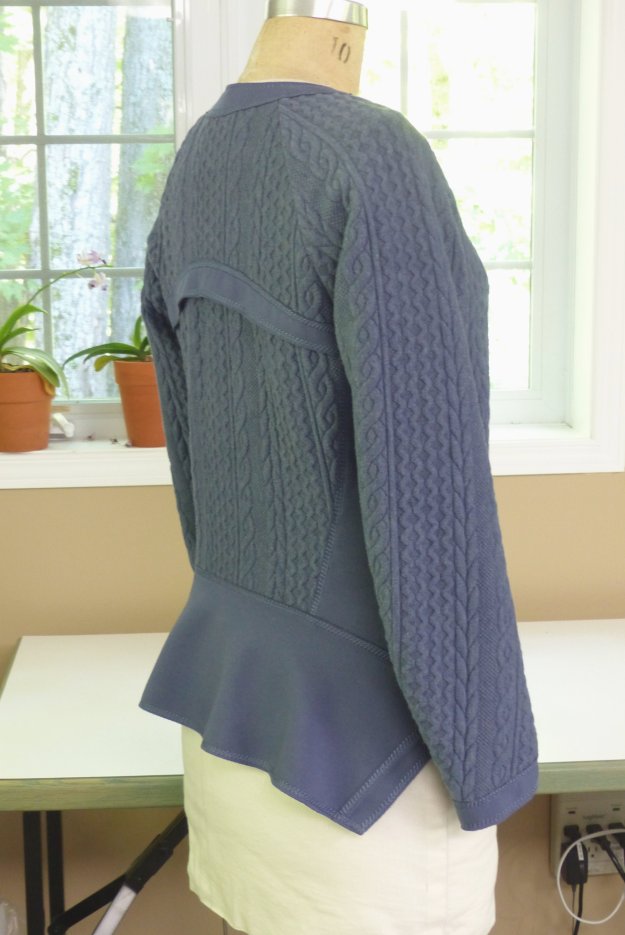 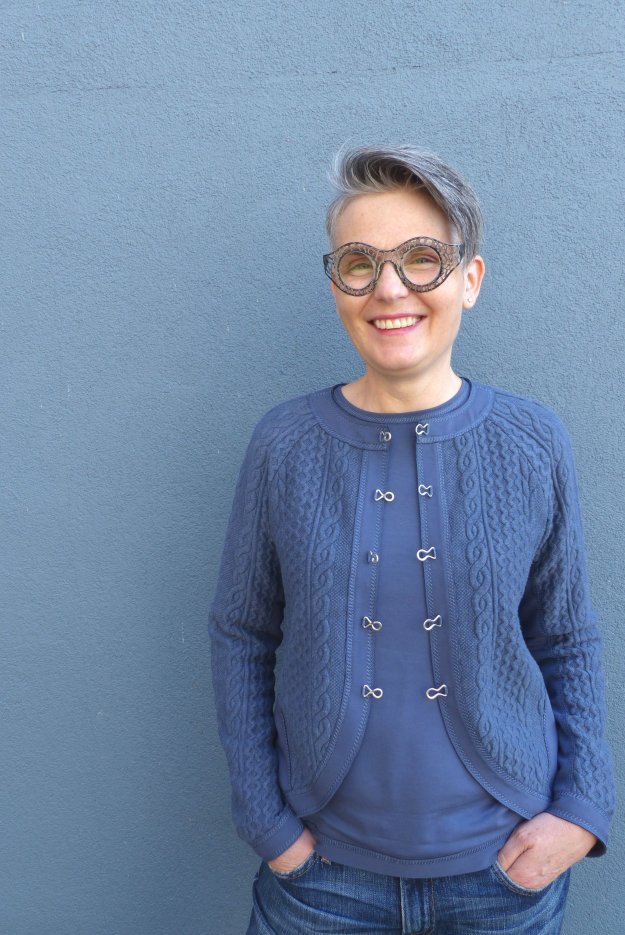